On April 24, 2014, the Toronto Police Services Board approved an innovative and wide-ranging policy on Community Contacts (also referred to as “street checks” or “carding”).  This policy provides a rights-based approach to police-community conversations with significant Board oversight and accountability mechanisms.  The policy, developed after extensive public consultation, can be viewed on the Board’s website, www.tpsb.ca.

A unique feature of the policy is the provision of a regular survey of community satisfaction to measure and determine the impact of the practices flowing from it on public trust and satisfaction with policing.  The Board will invite community-based organizations working with researchers who have expertise in Participatory Action Research (PAR) to carry out these surveys. The first such project will be a proposed survey in 31 Division.  The Board has allocated $75,000 from its Special Fund to fund this survey.

The Board invites proposals from community-based organizations to develop and carry out a survey to determine public satisfaction with police-community contacts in 31 Division during June-August 2014.    A link to the proposal document can be found by clicking here.

A public information session will be held on Tuesday May 27, 2014 from 4-5 PM, during which time Board members will be available to explain the initiative and answer questions.  The session will be held in the Auditorium, second floor, Toronto Police Headquarters, 40 College Street.

Posted by Alok Mukherjee at 1:00 PM

Special Board Meeting to Consider Policy on Community Contacts to be held on April 24, 2014

The Toronto Police Services Board has been reviewing the issue of “street checks” conducted by the police (also referred to as “carding” or community contacts) and has heard concerns raised by the community about racial profiling related to this practice.

On April 8, 2014, the Board held a special meeting to solicit input from the public on a draft policy on community contacts that had been developed by its counsel, Mr. Frank Addario.

The Board will hold an additional special meeting on Thursday April 24, 2014 at 6:00 PM, in the Auditorium at Police Headquarters, 40 College Street to consider a report from the Chair recommending approval of a final draft policy on community contacts. This report also includes information regarding the policy’s implementation and related expenditures.

The final draft policy, as well as the Board report, has now been posted on the Board’s website at www.tpsb.ca.


The Ministry of Community Safety and Correctional Services (MCSCS) is working with its inter-ministerial and policing partners to develop a provincial crime prevention strategy.  The first phase of this process included the development of the Crime Prevention in Ontario: A Framework for Action booklet, which is intended to raise awareness and to promote the benefits of crime prevention to Ontario communities and set the stage for further crime prevention work.


MCSCS has moved to Phase II of the initiative which entails community engagement with a number of interested communities across Ontario.  As one of its policing partners, the Toronto Police Services Board, on behalf of MCSCS, will be hosting a community engagement session and would like to invite you to attend.  The consultation session will be held as follows:


MCSCS will present an educational component on crime prevention to stakeholders in attendance and will provide an overview of current government initiatives.  As well, stakeholders will be asked to provide input regarding the following three questions:

1.      What types of crime prevention/community safety strategies and programs does your community currently have in place?


2.      Is there anything that could help your community enhance your crime prevention/community safety strategies and programs?


3.      Are there any barriers in your community that are preventing you from addressing concerns or gaps (systemic, disorder, quality of life, crime, etc.)?


The objective of the consultation is to develop key deliverables which provide analysis of the crime issues, risk factors, challenges, resources/partnerships in Ontario’s communities, as well as an overview of promising crime prevention practices currently being used in Ontario.


I very much hope that you will join us in this discussion and look forward to your assistance.  Please confirm your attendance with Karlene Bennett, via email at karlene.bennett@tpsb.ca, or by telephone at 416 808-7265, if you would like to participate.


Thank you for taking the time to participate in this process.

POLICE OFFICER OF THE YEAR AWARDS

For me and the Board, one of the highlights of the year for policing in Toronto is the Police Officer of the Year Awards.

This award "honours officers of the Toronto Police Service who have demonstrated exceptional skills, bravery, compassion and a deep commitment to making Toronto one of the safest cities in the world."

I believe that the vast majority of our police officers are dedicated professionals who demonstrate these qualities daily. And then there are those who go above and beyond their daily routine. The award by the Board of Trade, which began in 1967, signifies the community's appreciation of the exceptional acts of those who are chosen for these awards.

This year, the Awards are being held on Thursday June 2 at the Toronto Board of Trade, Downtown Centre. You can learn more about the evening and buy tickets here. The awards are being hosted by CBC's Dwight Drummond.

This week, Chief Bill Blair recorded a message on the Police Officer of the Year Awards. You can see it here.
Posted by Alok Mukherjee at 11:18 AM


With great respect, I must say that decisions made at the provincial level are largely responsible for this deal. The province makes the rules under which municipal police services boards bargain collective agreements. The province has repeatedly taken steps to set a pattern of steadily increasing costs in policing. It is in this context that we are left to negotiate a reasonable collective agreement.

No police service in the province bargains in isolation. The fact is that the terms and conditions of employment for police officers are set through pattern bargaining (mostly) or pattern arbitration (occasionally) amongst the largest police services. For example, arbitrators considering what to award police services in Durham, Sudbury, Hamilton and Ottawa look to settlements or arbitration awards in places like Toronto, the OPP or Peel.

Our province has a long history of driving up the costs of policing through deals given to the OPP.

For example, in a recent OPP contract, the pension plan was made much more generous than the pension plan that applies to all other police officers. It pays a pension based on the best three years rather than the best five. I understand that all of the past service costs for this change were paid for by the taxpayers. These changes will likely cost millions of public dollars. Other police associations are trying to bargain for the same treatment. The TPSB has said “no” to this twice so far – in 2008 and 2011.

For 2009 and 2010, the government has claimed that it achieved a lower increase for the OPP. In fact, the government temporarily increased OPP members’ retention pay by one percent for each of the two years in order to give the OPP a higher increase.

In 2010, the government gave the OPP, without arbitration, a 5.07% increase for 2011 (almost 2% higher than anyone else for this year). In addition, the government gave the OPP a guarantee of an across-the-board wage increase on March 1, 2014 (retroactive to January 1, 2014), which would make the OPP members the highest paid police officers in the province in 2014, regardless of cost. As a result, they will receive, at minimum, a 14.06% salary increase over four years (2011 to 2014). This has set the province wide police bargaining pattern.

Toronto's proposed agreement represents a cumulative increase of 11.5% over the four year period from 2011 to 2014 (two and one-half percent less than the OPP deal over the same period) – with no guarantee as to being the highest paid and no changes to the pension.

Turning to arbitration, the province has the ability to change the rules for arbitration. It has long been established that arbitrators replicate negotiated agreements. A municipality’s ability to pay as well as local and provincial economic conditions, which are among the criteria for arbitration set out in the Police Services Act, receive little, if any, consideration. The province has done nothing to change this. Repeated requests from municipalities, associations and police services across the province to fix this system have gone ignored.

Of course, I welcome a debate about a proposed collective agreement where all of the proposed changes are public and can be discussed. I believe that our tentative agreement is a proper reflection of the current collective bargaining (and arbitration) environment.

Premier, I would welcome the opportunity to meet with you and share our ideas on how to make police bargaining more realistic and consistent with our economic reality. In the meantime, we will move forward with our tentative agreement, which is far more cost-effective and realistic than that of the OPP, and which was reached through the hard work of both our Board and the Toronto Police Association.

We are pleased that yesterday we reached a tentative agreement with the Toronto Police Association.

You can read our joint statement here.
Posted by Alok Mukherjee at 5:23 PM 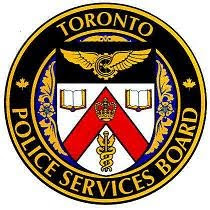